Did you find July a tough month, forgetting important dates in your diary? Sleeping through your alarm? Fear not, you can put these scrambled thoughts down to astrological August, and most importantly, Mercury Retrograde. 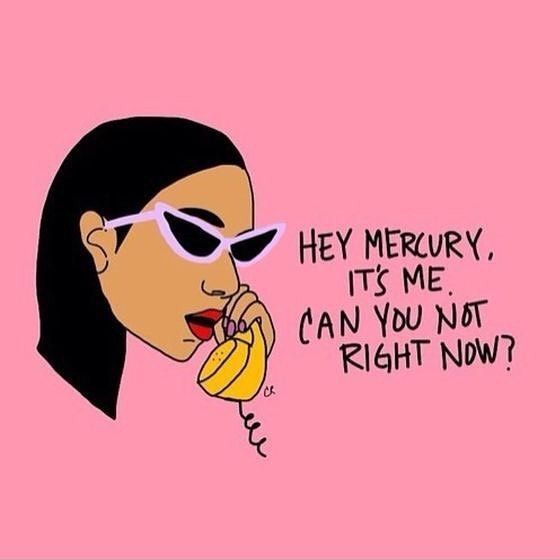 What is Mercury Retrograde?

You may have seen the term floating around on Instagram, but what exactly is Mercury in Retrograde? Wreaking havoc on all horoscopes, when planet Mercury goes retrograde and passes the Earth (which is does only 3 times every year) this can cause a tirade of communication-related chaos. Whether this is missing an important work email or falling out with a best friend over a misunderstood text.

Do's and Don't of Mercury retrograde:

Good news, Mercury retrograde officially came to an end on July 31st (however you may still be feelings its effects until it completely clears by August 16th). The next retrograde is due to return from October 31st - November 20th. To prepare we’ve compiled a list of things you can do to keep your cool during the next mercury storm.

Don't impulse buy:
It’s easy to make snap judgements during the retrograde, so it's best not to shop during this orbital shift. Do not even think about buying gifts, with wires more likely to be crossed during this time, you don't want to misunderstand  and forever be known as the bad gift giver.

Do think positive:
It’s written in the stars, so unfortunately there is not much we can do when Mercury makes its orbit. The best thing to do is keep your cool and think positive thoughts. (Adopting a new diary system also doesn't hurt during this time!)

What exactly is the Black Super New Moon?

The Black Super New Moon is when both the black moon and the super new moon occur at the same time, and although almost invisible to the naked eye from Earth, this signifies a time for reflection and new beginnings.

While the new moon rises in Leo, this is the perfect chance to take on board the new moons energies and embrace the key Leo traits to celebrate the new moon.

Key dates for your diary:

July 31st - The end of the second Mercury Retrograde.

August 16th - The negative effects of Mercury Retrograde should completely stop by this day, good vibes from here on out!

August 30th - The second and last Super New Black Moon of August takes place - luck is at an all time high.

Any birthday's this month? What to get a Leo/Virgo...

August has two zodiacs, Leo and Virgo. While Leo's element is fire, Virgos' is Earth and this energy can be heightened through the August birthstone, Peridot.

Peridot exists only in one colour and can be identified by it's distinctive bright, lime green shine. It's bold green hues were commonly believed to be a natural gift from Mother Nature and is said to bring the wearer healing properties, helps to frees the mind of envious thoughts and protects from nightmares.

Peridot is a strong statement stone and perfectly complimented with warm earthy tones or gold jewellery. Peridot is favoured Leos and Virgos that prefer to keep to one statement piece of jewellery. For those that like to layer, the Salina Necklace features a small inject of Peridot complimented alongside a rich, 18kt gold-plated pendant and dainty chain. August-babies should layer this amongst their other favourite pendants as a nod to their zodiac.

For those looking to embrace their birthstone colours to the max, the Aeolian Bead Necklace contains a nestled Peridot gem amongst a strand of semi precious Moss Agate stones. Combined with the Peridot, Moss Agate is also said to have healing properties. For the ring wearer. The Panarea Ring, similar to the Salina features a small, nestled Peridot gemstone. Let yours glimmer and catch the light by wearing it facing outwards, or flip it around to face you to ensure you take in all of its protecting properties.